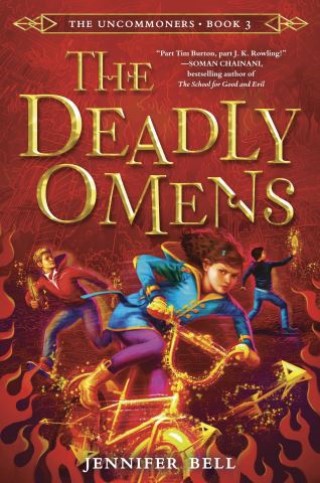 The Uncommoners #3: The Deadly Omens

Anyone with a Hogwarts-shaped hole in their lives can't miss the third book and final showdown in this fantasy series. Return to Lundinor, the underground city that holds the world's greatest treasures . . . and its biggest threats.

After years of searching, Ivy gets word that her best friend Valian's long-missing sister Rosie may be hidden in the uncommon trading city of Nubrook, located under the populated New York City. The kids reunite to scour Nubrook for any sign of Rosie, but the hunt leads to one of the last remaining Great Uncommon Good: the Sands of Change, an enchanted necklace that turns objects--and people--into their opposites.

The ever-powerful Dirge guild is no doubt also on the hunt for the pendant, so Ivy and her friends are in a race against time to find Rosie and put an end to the Dirge once and for all!

Don't miss the epic conclusion in the fight to save the uncommon world.

Jennifer Bell: Jennifer Bell's The Uncommoners #1: The Crooked Sixpence debuted as a Kids' Indie Next Pick and a Children's Book Council "Hot Off the Press" selection. It was also named one of the Publishers Association's Best New Children's Books and hit the #5 spot on the Sunday Times children's bestseller list in the UK.

When not thinking about what uncommon tape measures might do, Bell can be found talking about her other favorite stories as a bookseller at an award-winning children's bookshop in London. You can find her online at jennifer-bell-author.com, on Facebook, and on Twitter at @jenrosebell.